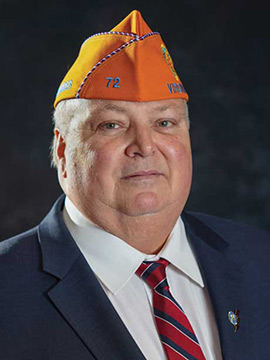 Clint is a proud member of the Sons of The American Legion John D. Sudduth Squadron 72 in Warrenton, Va., where he has been a member since 1998.  Clint married his wife Becky in 1987, and they have one son named Jason. Jason is married to his wife Rachel, and they have adaughter named Ella Marie, who is 1 ½ yrs. old.  Clint has two stepsons, Greg and Josh. Greg has a 12-year-old son named Caleb James. Josh is married to his wife Racheal.

Clint is a restoration carpenter. His most notable work is on North Wales, a 1750’s Country Estate in Warrenton, Va., once owned by Walter P Chrysler Jr.  This home is listed on the National Registry of Historical Places and is one of the largest homes in Virginia.

Other prominent work is on the c.1858 private residence of The Gray Ghost, Colonial John Mosby. This home served has a museum for the town of Warrenton for several years.  Now a private residence, the home is part of the Civil War history of the town and the State of Virginia.

Clint’s other interest in old things extends to classic cars. He is a member of the Vintage Chevrolet Car Club of America. His current project is a 1935 Master Sedan. His goal is to have the car completed by the Memorial Day parade next year. There is nothing he likes more than going to car shows and seeing all those beauties.

Clint has served his squadron and detachment at all levels. Clint is most proud of the detachment scholarship program he started in 2003.

Clint served as national vice commander in 2010. He served as Children and Youth Commission chairman, VA&R Commissionchairman. He was the national representative for the Sons of The American Legion on the VA Volunteer Service National Advisory Committee. This is the only outside organization that the Sons belong to with full voting privileges to assist The American legion.

Clint is eligible for membership through his grandfather Kennard “KC” Bolt. He served honorably in the United States Navy during World War II and was stationed at Norfolk, Va.

Clint is very proud of his grandfathers service in the war but is also just as proud of his grandmother Marie Bolt’s service.  She, like so many women at that time had to raise the family and work toward the war effort. She not only had her husband in the war but also had three brothers and many other family members serving. Remarkably, she managed to keep the home going raising little children, the oldest was his dad, William Bolt, but she was a lathe operator at the torpedo factory in Alexandria, Va.

Sons of the Legion